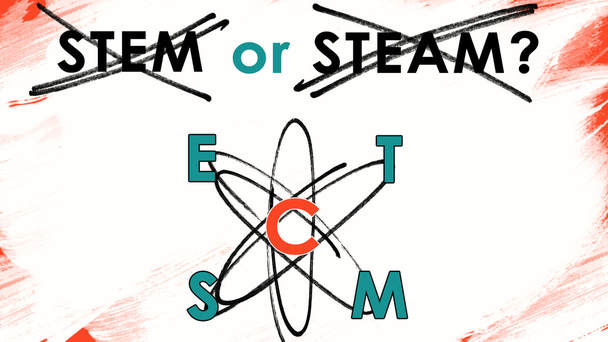 I recently had the opportunity to sit down with two network TV executives who told me, point blank, "Art simply does not sell." I was told it evokes images of wealth and elitism. I had no idea "art" had become a four-letter word for many of us. When did it happen? And why?

In many respects, I get it. Art, or being artistic, is a category many of us removed ourselves from after fourth grade. I often observe how we put ourselves in certain silos around fifth or sixth grade: scientist, writer, athlete, etc. Art quickly becomes synonymous with "those people" or "those museums"---a tragedy I am attempting to tackle.

STEM and STEAM are incredibly popular buzzwords in our culture right now, and if I had to take an educated guess, I would say STEM is winning. With such an emphasis on testing in schools, it makes complete sense why STEM is gaining steam (no pun intended). We feel comfortable focusing on the measurable, the quantifiable. However, if STEM is the vehicle to the future, then I ask you to consider this quote:
" We are moving from an economy and a society built on the logical, linear, computerlike capabilities of the Information Age to an economy and a society built on the inventive, empathic, big-picture capabilities of what’s rising in its place, the Conceptual Age."
​- Daniel H. Pink
I recently read that if you add up every U.S. college graduate in one year, that is roughly the same number of engineers graduating in India that same year. The reality is that we are not going to be able to keep up. In areas of study such as mathematics, it is clear that many other countries are outperforming us.

So, what do we do? Is STEAM the answer?

No, I don't believe it is the answer. Adding "art" to the mix is never going to work, especially in education circles. Why? As the executives said, "Art simply does not sell." Instead of simply crowbarring art into this, I suggest we look at a more powerful buzzword: CREATIVITY. It doesn't make for an easy acronym, but it's the right word nonetheless.

What do Apple, Kate Spade, Dyson vacuum cleaners, DaVinci, and Burton snowboards have in common? They combine STEM with incredible amounts of creativity. We can teach the power of coding all day long but, at some point, the user experience and the design has to be addressed. You can create the sexiest code, but eventually it has to be encased in something---a product. And guess what? Products need to be designed.

What I have learned is that outside of educational venues, these STEM and STEAM silos do not exist.

What does exist is more like an ecosystem, which I prefer to visualize as an atom. Every element has to be involved, and none is stagnant. Each element has to continually move and interact. At its nucleus, you have creativity combining forces with all the other elements.

In order to prepare the next generation to compete in the global economy, we have to realize that every area of study is imperative. But we must also realize creativity is often the fuel within it all, giving us everything from the lightbulb to the iPhone. Nearly everything we wear, ride in, and live in has been touched by STEM but also a heavy dose of creativity.

This is why I love filming creative stories that focus on the relationship between designers and engineers, form and function. I not only dig into the culture they grew up in, but also into the companies and cultures that cultivate this type of innovative thinking.

Brain research has now proven that creative thinking does not happen in one side of the brain while the other solves math equations and makes lists. Researchers are now discovering creative thinking happens in multiple areas of the brain, with both hemispheres working together.
​
If our brains are designed this way, maybe our companies, schools, and industries should be, too.
​​